I think it’s time I get a little real with y’all.

And that’s not even a sarcastic opening this time!!! I realized I’ve never really shared why I started cooking.

Let us venture back to pre-teen Rachel. Or as I like to refer to her, she who must not be named. Growing up, I was ALWAYS the smallest kid in class. Like, got the kids menu and looked like an 8-year-old boy until I was 17. I don’t recommend this if you’re interested in having self esteem. Puberty rolled around my junior year and I became an average height, but was still skinny and could eat WHATEVER I wanted. I’ve told y’all about how I used to leave school, eat 12 nuggets, fries and a milkshake and THEN eat dinner. Those were the TIMES, man.

Sophomore year of college came around and I gained the weight we all do at that pivotal time. Nothing crazy, but it looked odd on my small frame. I honestly would have been blissfully ignorant except this was during the rise of social media when it became the vortex of self-pity and comparison we now know and love. I saw pictures of myself and just hated what I saw. I had never felt pretty (have you seen this schnoz?!), but I had always counted on being small. My first world, middle class, not enough problem-having world was rocked! Chicken nugget girl had no idea how to eat healthy, so I started restricting myself. I lost 20 pounds eating a bagel for breakfast, a granola bar for lunch and a little something for dinner. Or as I like to call it, the diet of an idiotic college girl who cared far too much what peeps thought of her. While I eventually began eating more, I continued the unhealthy restrictive habits. It wasn’t until I called my mom crying one afternoon after treating myself to Zaxby’s (wow, what a treat!) and feeling SO guilty, that I realized it was time to make a change. She took me to the grocery store, bought me food and taught me how to bake some chicken breasts. From there, I turned on Food Network and haven’t turned it off in over six years. I watched every single show and tried to learn as much as I could. I would spend my free time searching for recipes and reading about food. I started this blog to document some of the recipes I liked, and here we are. Almost 5 years later and this little space of the Internet is still one of my favorites. 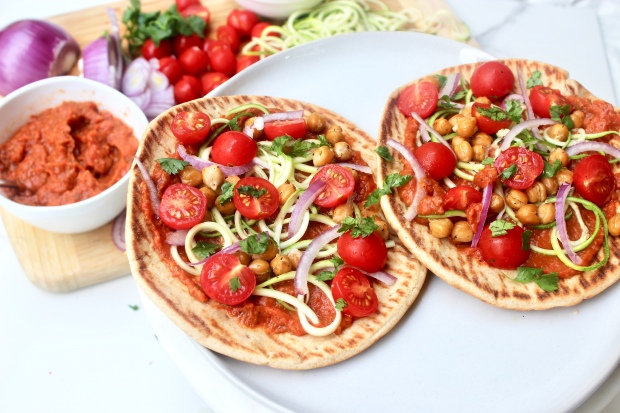 Thank you for reading along and allowing me to be a lunatic and share some food and look at your food and I promise I eat quadruple the calories I used to – for example, I ate both of these pitas immediately after taking these photos.

Spread adapted from my girl, Ina!

Avocado + Charred Corn White Pizza | This was how we did Valentine’s Day this year. Pizzas at 3, bed by 9. Romance.🍕#ontheblog now!
Chickpea Dumplings | Can y’all tell I finally read the 928383 food magazines on my coffee table? @eatingwell been coming in clutch with ideas! #ontheblog now 🧅 let’s pretend the onion emoji is a chickpea
Spiced Poppyseed Shortbread Cookies | What a blessing it is to have cookie dough sans egg 🍪 P sure we ate 3/4 of the recipe raw 🤷‍♀️#ontheblog now
I am the best version of myself when surrounded by fajitas & beans 🦑
Don’t let the nice pic fool you, this was an epic fail. Oh, I still ate it all. I don’t let pasta go to waste. But I tried to adapt a recipe from @foodandwine by using fresh ginger & ground turmeric vs. the teabags the recipe calls for. IDIOT 🤦‍♀️ Not #ontheblog because it sucked, but I’m sure the original recipe is gr8!
Edamame Burger Lettuce Wraps | Our friend rear-ended my car this afternoon & I’ve never cared about anything less. The last few weeks have reminded me how meaningless *stuff* is. Let’s all rear-end each other’s cars!!!!! 🍔 #ontheblog now